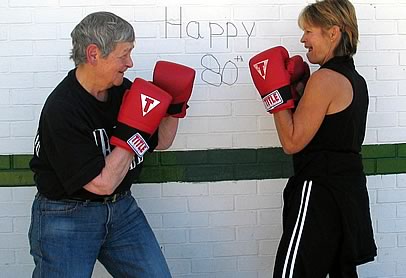 Over the last 20 years, my assumption about aging has slowly taken a huge paradigm shift. In fact, many people over 50 are convinced the last stage of the aging process is potentially the most vital and powerful time of the life cycle.

Even where there is illness, people have to an understand and expectation that they can actually be their most powerful in the last one third of life by taking more care of their bodies and minds. We maximize the last decades by growing, exploring, expanding minds and beliefs and most importantly, taking steps to stay as physically strong as possible.

Nature intended for human beings to continually develop their potential power until death, which would lead them to be more involved and more effective as years pass rather than less so. During my years of helping people reach their goals in strength, healthy weight and eating, I have witnessed the age of my clients move from 25 to 93 years old.  Currently, the median age is 70ish and I expect it will continue to increase as the time passes. As a personal fitness coach, I am currently experiencing the most fulfilling time in my career.

The old paradigm of aging says we become physically weaker, declining in thinking, fitness and life power, which I believe is the opposite of what nature intended for human beings to experience. By embracing the new perspective of aging, we would continually empower and excite our own growth as well as the people around us.

Roberta Karant, PhD, creator of The Human Development Company shares two studies what support the new thinking of aging as the greatest time of potential. These two studies show the harmful impact of the negative societal views and belief systems regarding aging. One study, funded by the National Institute on Aging, shows that individuals susceptible to negative images of aging die 7.5 years younger than those without such images. The second study, published in the September 2004 issue of Psychology and Aging, indicates that people susceptible to negative images have a poorer memory retention rate and become frail sooner.

Dr. Karant says, “There are four stages of development; awareness, conscious vision, conscious communication, and loving unconditionally, which most importantly includes learning how to give and receive love unconditionally.”

As the growing acceptance of this new vision of aging, I believe more people will strive for the promise that lies in finding true fulfillment and self-actualization.  Creating new visions will begin to rewire the brain’s neuropathways, which is supported by ever-expanding evidence that learning and growth is available to all.