Everything Changed with a Punch!

Peter Leventhal is a 71-year-old, lifelong artist, painter and sculptor who moved to San Miguel 11 years ago. He was diagnosed with Parkinson’s disease in 2001. The most obvious symptom resulted in a major tremor in his right hand. Peter’s life’s work required him to stand and use his hands to create art. Initially, he felt his career might be over, but he now has learned to paint with both his left hand and his right. He sometimes uses the left one to still the shaking while painting with his right. 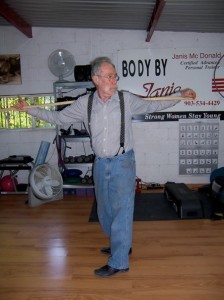 I would like to share his journey in dealing with his affliction and conquering his fears. During my year of helping Peter with his physical fitness program, I have experienced many surprises at his willingness to try anything that I threw at him with enthusiasm and optimism.

It started when he called for a fitness consultation. Peter had been working out to improve his strength for 20 years. He knew that exercise was the most important beneficial activity he could do to help with his deteriorating affliction and advancing age. However, he was finding ever-widening gaps in addressing these issues only through strength training.

We spent the consultation assessing his needs and developing a clear goal for addressing them over an initial three-month period. Peter was experiencing an increasing loss of balance and feared walking down San Miguel sidewalks, and especially the Aurora bridge if people were on it. Peter shared his doubts about whether a fitness program could improve the issues that were directly related to Parkinson’s. His most debilitating symptoms were shaking and tightness of muscle movement, and he feared that he would reach a catatonic state. I had hope that Peter could improve, but after our consultation, I thought that his slow gait, fatigue and shaking hand might dictate a long, slow and questionable path toward improvement. 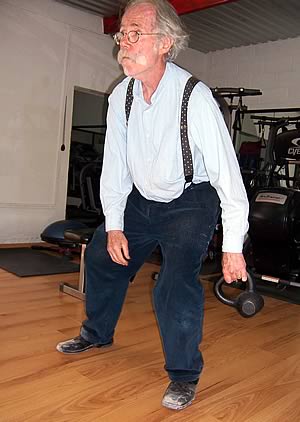 After establishing his initial goals, I introduced Peter to Vibrational Technology, which is training on the Power Plate (see www.powerplate.com for information on research results). In my experience, starting with this would be the safest and most effective initial workout for him, and it was. “The Power Plate has had an immediate effect on my balance,” Peter told me, “and I have begun to feel more confident that this is the right process.” The increased confidence in his ability to maneuver and walk better, he said, signaled to him that he was ready for anything I had in mind. We expanded the fitness menu and started to explore other exercise options.

We began with a big stability ball. Peter commented on its great “roundness” and thought it was a pretty scary idea, but when I demonstrated that he would only be 18 inches off the floor, he committed himself to it. The ball enabled Peter to make improvements in his core strength and balance, and it allowed him to face his fear. He gained more confidence and more trust in the control of his body as a result.

When Peter remarked on strange-looking metal objects of torture on the gym floor, I explained that they were Russian kettlebells. The KGB had used them for training, and now they were being used in the fitness industry. Kettlebel I training develops all-around strength, balance, power and speed. Speed loss is one of the most negative results of aging, and training for speed is very important toward active aging and the prevention of increasing “slow down.” Peter’s background is Russian. His favorite athlete was Russian Olympic heavyweight lifter Vasili Alexeyev. Kettlebell training seemed like a perfect fit. Peter, who has a great sense of humor and daring, came to the gym with music by Vladimir Visotsky, a famous Russian “Bob Dylan.” Poco a poco, starting with the lightest Kettlebell and moving upward, Peter achieved ten Kettlebell exercises with proficiency and speed.

I like to play a wide variety of music in the gym. Peter usually can name the song and artist, and he amazes me with stories of many he had met in New York. So, I decided it would be fun to create an aerobic dance for him, and after a few weeks he got it by heart and feet. More importantly, it helped him with balance, exercised his memory and helped him move with greater confidence, especially when crossing the Aurora bridge.

Now, back to the clay when he threw that punch at the avocado tree. I wondered if he had ever boxed. “Let’s put on the gloves,” he replied. Peter had assumed there were certain things that he could no longer do, like boxing, which requires hand-eye coordination, rhythmic repetition and sudden changes in direction. All of these actions were difficult, but the boxing activity that he took on has helped him make transitions in movement with a certain amount of grace and ease. Like all training Peter has done with me, the activities have equally developed both sides of his body without favoring one hand or foot over the other. 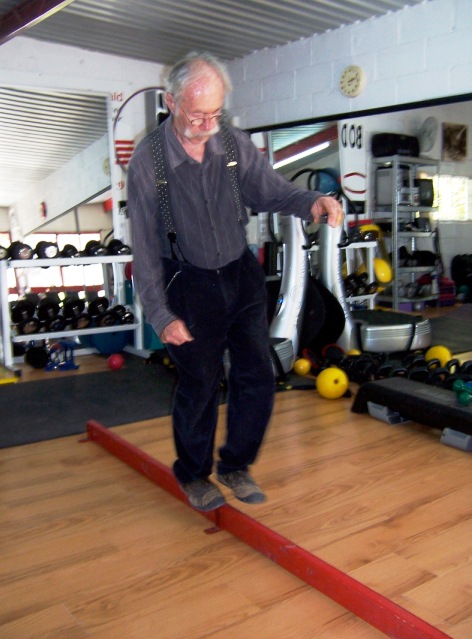 “My whole experience in training has been one of centering and balancing,” Peter noted. “My hand still shakes but I am doing things that I never thought possible, and I am doing something to stop the progression of Parkinson’s.”

A family tragedy recently required Peter to fly to the States. When he returned to San Miguel, he immediately came back to the gym. “Emotionally, I knew this was the best thing for me to do:’ Peter said. “Exercise would help me more than anything else, and all I had to do was Just show up.”

As a trainer for the last 40 years, I am completely convinced that showing up is the most crucial step we must take as we age. I love Newton’s Law of Inertia, which states an object in motion stays in motion while an object at rest stays at rest. Staying in motion means that you are on an unending circle of continuous growing, learning and developing.

Peter is my hero. His story kicks off a monthly Inspired Training column in which I will share other stories about people who have just showed up.